In the Saturday, July 12 edition of the Herald Sun, there’s a one-page interview with Jenny Valentish by books editor Blanche Clarke about the spectre of Molly Meldrum, grisly old rock stars, the significance of Nina being from Parramatta and why Cherry Bomb isn’t misery lit.

Her time as features editor for Guitar and Bass magazine also fed into the book. ‘I interviewed all the grisly old rock stars for that, which I’ve channelled into the Bitumen band,’ Valentish says. Nina sleeps with Strider, the lead singer of ‘living legends’ Bitumen, during a tour and her post-coital analysis is typical of her calculated career moves and bleak sense of humour.

‘Sleeping with somebody who was once part of a pivotal scene, as Bitumen were in their day, was like immersing myself in a textbook,’ Nina tells the reader. ‘In the whorls of Strider’s calloused fingers I saw the fallen women and famous scenesters; the Michael Hutchences, the Nick Caves, the Chrissy Amphletts. It was sexual osmosis.’ 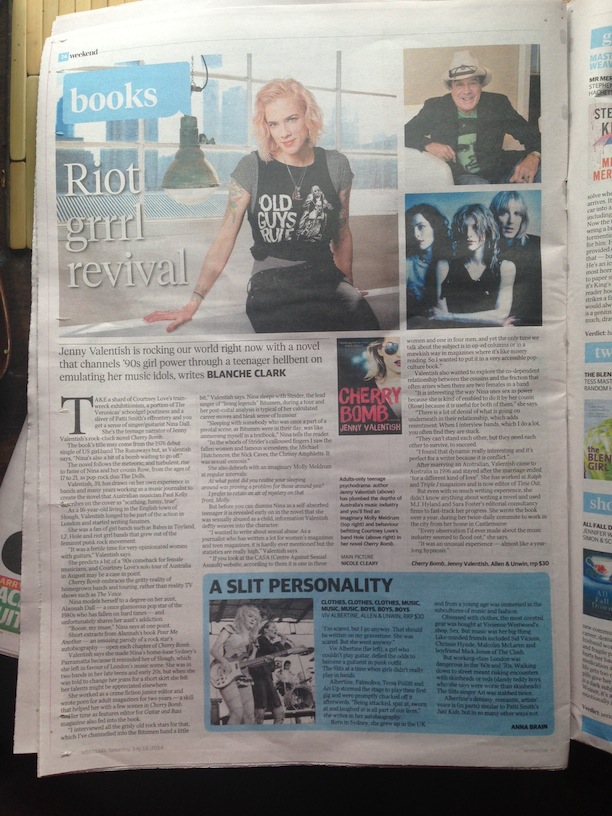